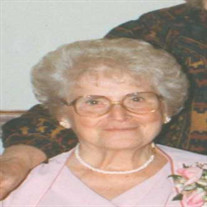 Anita M. Monfette 1918 � 2009 Holyoke � Mrs. Anita M. (Desrosiers) Monfette, 90, a lifelong Holyoke resident, passed away on Monday, May 18 in a local nursing home. She was born in Holyoke on October 3, 1918, a daughter of the late David and Marie (Tremblay) Desrosiers, and was a graduate of Holyoke High School. She retired after forty years of service from National Blank Book where she was also a member of Club 15. She was a lifelong communicant of Immaculate Conception Church and a member of the League of the Sacred Heart. She was the wife of the late Arthur R. Monfette, Sr. who died on August 15, 1995. She is survived by her son, Arthur R. Monfette, Jr. and his wife Cathy of South Hadley, and her daughter, Eileen Fountaine and her husband William of Longmeadow. She will be sadly missed by three grandchildren, Debbie Arbour, Robert Arbour, and Christopher Monfette, two great grandchildren, Stephanie Dibble, and Timothy Arbour and many nieces and nephews. She was predeceased by two brothers, Leo and Romeo, and seven sisters, Rose Reardon, Ida Kezlowski, Doris Orlowski, Lydia Trudell, Yvonne Patenaude, Imelda Kusmier, and Ella McDonald. Funeral services are Friday, May 22nd at 9am from the Messier Funeral Home, 1944 Northampton St. (Route 5) Holyoke, followed by a Liturgy of Christian Burial at 10am at Immaculate Conception Church, North Summer St. in Holyoke. Burial will follow in Notre Dame Cemetery in South Hadley. Calling hours at the funeral home are on Thursday, May 21st from 4 � 7pm. In lieu of flowers memorial contributions may be directed to the Shriners Hospital for Children, 516 Carew St. Springfield, MA 01104.

The family of Anita M. Monfette created this Life Tributes page to make it easy to share your memories.

Send flowers to the Monfette family.